70th anniversary of the adoption of the Human Rights Universal Declaration

According to the UN, the human rights movement has made visible progress over those 70 years, but, unfortunately, human rights abuses continue around the world. Therefore, this anniversary of the Universal Declaration of Human Rights is a good opportunity not only to exalt the successes achieved, but also to engage newly in respecting and applying the principles outlined in the 30 articles of the Universal Declaration on Human Rights.

"Without a common commitment of citizens to support and protect these human rights in their neighborhood, then we are waiting in vain for these universal human rights to be implemented in the wider world," has emphasize Eleanor Roosevelt.

The Universal Declaration of Human Rights gives each of us not only to protect our human rights, but also the rights of others. As an inspiration to support human rights for our self and others, in this 70th anniversary, the Universal Declaration of Human Rights is a universal and important document for every individual and society - at the same time, according to the UN, this is the world's most translating document in more than 500 different languages.

On this date, the Coalition "Women Security Peace" draws once again the attention that:

Let’s work harder for the implementation of  Resolution 1325 "Women Security Peace" in our country. The role and place of women in this agendas is as important as men's. Join us to have more women engaged in peace and security agendas in the country, the region, and the world!

After 18 years, Albania has an Action Plan in implementation of Resolution 1325.

Civil Society has played and plays a crucial role both during the drafting process and in the implementation of United Nations Security Council Resolution 1325 on Women's Security and Pace Action Plan. "The Association of Women with Social Problems", now the " Women Security Peace", as well as the Peace Liberation Coalition, have been major drivers of state structures in drafting the draft plan for implementation of  this resolution and continue to be active in commitments related with our country.

The role of civil society in implementing the Resolution Action Plan adopted by DCM no. 524 dated 11.09.2018 provides expressly the support of the Coalition of Civil Society Organizations for Resolution1325 engaged in the Women's Agenda Peace and Security consists of:

• Building a platform for realizing our commitments to this plan,

• Monitoring and evaluating the implementation of the plan,

• Raising the awareness of women's role, for Resolution 1325,

• Encouraging exchanges of experience at regional, national and international levels,

• Increasing the participation of women in the field of security at home and abroad,

• Establishment of a regulatory framework enabling better protection and rehabilitation of women in the field of peace and security,

• Cooperation with civil society organization and state institutions for the implementation of Resolution 1325. 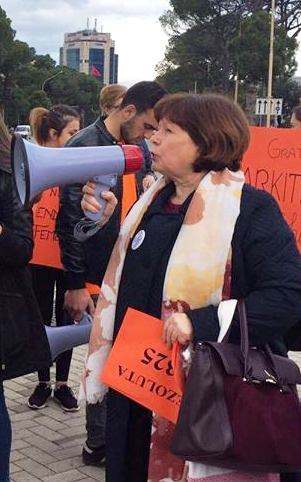