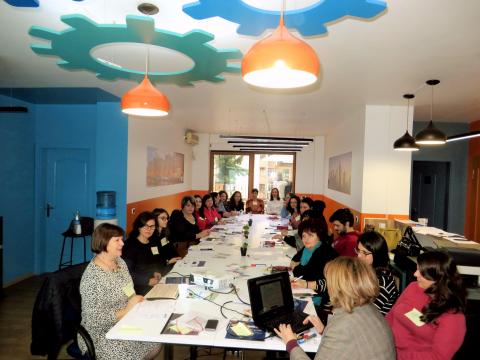 The "Association of Women with Social Problems” today the “Association Woman, Peace and Security” in the frame of “Re-Think. Experiment. Solution” Project, supported by the UN Women, Fund for Gender Equality, held on November 21, 2018 at the premises of Dutch HUB/Tirana, the next meeting with the representatives of 25 Civil Society Organizations, members of the Coalition Women, Peace and Security.

Mrs. Bajana Ceveli, Executive Director of AWPS update on the Re-think Experiment, Solution project and showed the purpose of this meeting for further strengthen of the Coalition by motivating members to become more actively involved and take responsibility as such as well as organizing Coalition members into working groups according to the priorities.

The participants were divided into three groups as per the location of their activities, in order to discuss and insight on the needs of their organizations as per a localized viewpoint. Following, each group presented in front of the participants their conclusions. The trainer Mrs.Eralda Cami, at the end of such presentations facilitated the discussion aimed at identifying joint needs of the Coalition members. Such needs resulted to be:

-Capacity building of the members’ staff and of other CSO-s as well.

-Partnership. The need to build a bridge with local government and develop it into a partnership.

-Financial support for operational functioning of the Coalition, promotion activities through increase of visibility, actions, logistics.

-Experience exchange within the Western Balkans region as well as with other countries in the EU that have had successful experiences in the WPS Agenda.

The following priorities of the Coalition Woman Peace and Security were agreed upon:

-Increasing public awareness to broaden WPS at the country level agenda as vehicle of change.

-Advocacy/ lobbying at the local and central level for moving forward the implementation of the National Action Plan.

At the end the draft regulation prepared by the expert was reviewed as per the identification of topics form the participants and final act was agreed, printed and distributed to all the parteciaption.

The results of the experimented Solution:

-Good interaction and socialization of CSO-s members of the coalition.

-Better level of motivation of each member of the Coalition regarding ownership and participation.

-Identification of Coalition priorities and activities.

-Division of Coalition Membership in three groups for the further process.